One-of-a-kind amenities and futuristic architecture, these palatial houses are home to the world’s uber-rich. The properties come with a heavy price tag and are loved by business tycoons, IT moguls and Royalty. Here are a few impressive and extravagant residences from around the world. 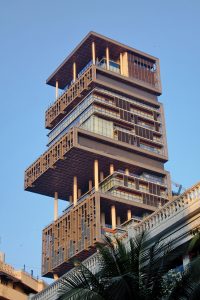 One of the more famous private residences in the world, Antilla is home to Indian business tycoon Mukesh Ambani. The 27-storied-high house in South Mumbai was designed in consultation with Chicago based architecture firm Perkins & Will and Santa Monica-based hospitality design firm Hirsch Bedner Associates. The house has 3 helipads, a theatre, a temple, spas, a grand ballroom, a car service station, a 50-seater movie theatre, high speed elevators and multi-storeyed car storage. If that list was not impressive enough, the house can also sustain an earthquake of 8 on the Richter Scale!

Recently the celebrated couple were in news for their divorce but that does not take away the sheen from their extraordinary house in Medina, Washington. The high-tech house was built over 66,000 square-foot waterfront estate in a span of seven years. While the house was built at an estimated value of $63 million, today it is valued at around $125 million. The lavish property comes with an underwater music system in the pool, 2,100 square foot library, 7 bedrooms, 24 bathrooms and 6 kitchens! 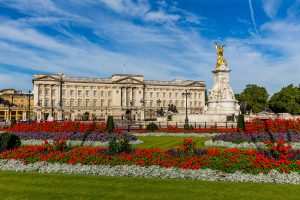 Buckingham Palace has been the official residence of the British monarchy since 1837, which is under the British Crown’s Trust and the most valuable house in the world. There are 775 rooms and 92 offices inside the palace. Every summer when the Queen stays in Balmoral Castle in Scotland, Buckingham Palace’s many state rooms are opened to the public. The palace is the centre stage for several significant national celebrations in the United Kingdom.

Situated in n Kensington Palace Gardens, considered to be one of the most expensive streets in the world, the Taj Mittal is about 55,000-square-feet complete with 12 bedrooms, a lavish swimming pool, a ballroom, art gallery and a Turkish bath. The house belongs to Indian steel tycoon Lakshmi Mittal, who bought this from English businessman Bernie Ecclestone in 2004 at $57 Million and after renovation with marble that was sourced from the same quarry as the Taj Mahal, he named it ‘Taj Mittal’. The house was originally designed by Sir Charles Barry in 1845. 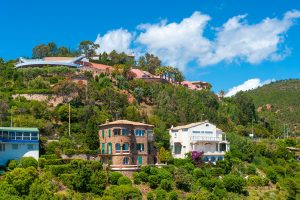 Famously known as the ‘Bubble Palace’, Les Palais Bulles is currently owned by fashion designer Pierre Cardin. The house, which overlooks the Mediterranean Sea, was designed by Hungarian architect Antti Lovag during 1975-1989. The uniquely designed house comes with three swimming pools, many manicured gardens and a 500-seat amphitheatre.

The Penthouse, which comprises 3 floors in the building and is about 23,000 square feet, was bought by American Hedge Fund manager and billionaire Kenneth Cordele Griffin in 2019. The property has an exclusive and coveted address in New Year – 220 Central Park South. The house has 16 bedrooms, 17 bathrooms and 5 balconies, overlooking the spectacular city.

The Odeon Tower Penthouse in Monaco

The stunning penthouse is one of the most luxurious pieces of real estate in the world. Designed by architect Alexandre Giraldi and developed by Groupe Mozocco, the apartment is 35,000 square-foot apartment on the top of one of the most iconic buildings in Monaco. The penthouse comes with several floors, a waterslide with a 360-degree view infinity pool and a private elevator.

Located in the Frances Alps-Maritime department of its Cote d’Azur Region, the stunning villa has 11 bedrooms, 14 bathrooms, a helipad, outdoor kitchen and a magnificent swimming pool. The house is on an area of approximately 50 acres. The house gets its name from its original owner King Leopold II of Belgium. The iconic house was also the backdrop of the famous Alfred Hitchcock movie, To Catch a Thief.